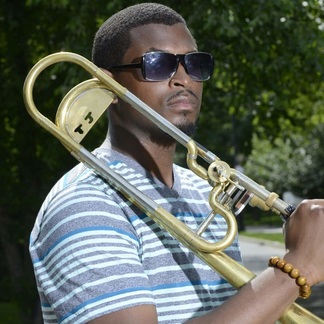 Timothy James Robinson (T. J.) began playing the trombone at the age of eight. He attended the Charleston School of the Arts for middle and high school, which strengthened his determination to pursue music professionally. He then moved to New York City to study classical trombone at the prestigious Manhattan School of Music and also abroad at the Royal College of Music in London. He is now an active freelance musician in the city, performing with many classical ensembles and various other groups such as the Artie Shaw Band, the Grammy-nominated Manhattan School of Music Afro-Cuban Jazz Orchestra, as well as touring around the world with the group Circular Time. He is currently an active member of the PitchBlak Brass Band, where he composes, raps, and plays trombone.