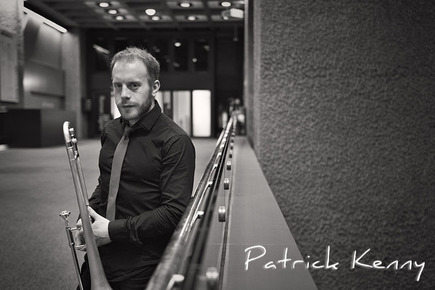 Born into a musical family, Patrick played piano and recorder from an early age, took up trombone aged 11, and was also a chorister at Old St Paul’s in Edinburgh, Scotland’s oldest “sang school”. He studied at St Mary’s Music School, and in his final year obtained the Advanced Jazz Diploma of St Andrew’s University, before going on to study at the Guildhall School of Music and Drama in London, where his studies were generously supported by the Donald Dewar Trust and the Cross Trust. He was also awarded an Erasmus Foundation Scholarship which enabled him to undertake a period of study at the Paris Conservatoire.

Patrick also plays the carnyx, a 2,000 year old Celtic war horn (of which only two reconstructed examples exist) performing at events including the opening ceremony of the Derry Year of Culture in Ireland, the televised celebrations for the re-opening of the National Museum of Scotland in Edinburgh, and the final concert of the Belladum Festival 2014. He was invited to become a member of the European Music Archaeology Project (EMAP) in 2014.
His classical ensemble experience has included Music Theatre Wales, The London Sinfonietta Academy, Dartington Festival Orchestra, Aurora Festival Orchestra in Sweden and the Chipping Campden Orchestra. He was also a semi-finalist for the BBC Young Brass Award 2010, and has performed at the Mumbai International Festival, International Jazz Conference in Toronto, and as a Young Artist at the International Trombone Festival, Beijing.
Since 2013, Patrick has pursued an advanced study project, generously sponsored by the Musicians Benevolent Fund, which has enabled him to meet and study with leading trombonists across Europe and the USA in the fields of jazz, classical and early music.