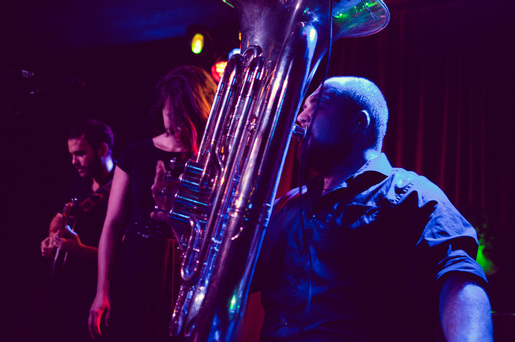 Christopher Barrett is a tuba player, bandleader, composer and pioneer of the electric tuba. He started playing euphonium at the age of 10, switching to tuba at 13. Whilst at school he co-founded the Sequoia Brass Quintet, all of whose members went on to attend major conservatoires around the world. In 2004, Chris was offered a scholarship to the San Francisco Conservatory of Music, where he studied with tuba player Jeffrey Anderson of the San Francisco Symphony Orchestra and trumpeter Mario Guarneri of the Los Angeles Philharmonic. While studying in San Francisco he was appointed Principal Tuba of the renowned San Francisco Symphony Youth Orchestra; he held the position for three years and toured Europe with the ensemble in 2007.

After three years in San Francisco, Chris was awarded a scholarship to the Royal College of Music in London and transferred there in 2008, graduating with a BMus in 2010. His second year at the RCM was supported by a scholarship from the Martin Musical Fellowship Fund. While there, Chris played in the RCM Symphony Orchestra under Sir Roger Norrington, Vladimir Jurowski, Esa-Pekka Salonen and Diego Masson, received the Tuba and Brass Ensemble Competition prizes, and performed the solo tuba part in Stockhausen’s Trans in the Queen Elizabeth Hall. After leaving the RCM, he took part in the London Philharmonic Orchestra's Foyle Future Firsts programme, and was appointed Principal Tuba of the European Union Youth Orchestra, touring with the orchestra five times over two years. During this time he worked with conductors Vladimir Ashkenazy, Claus Peter Flor, Gianandrea Noseda, Matthias Bamert and Peter Stark.

Chris is currently active as a freelance musician, composer, bandleader and teacher: playing in both classical and non-classical contexts and teaching in schools. He has recently played with the London Chamber Orchestra, London Philharmonic Orchestra, London Arts Orchestra, Orchestra of St Paul's, Pentagon Brass, Mimika Ensemble, Brassroots and has been Principal Tuba with The Orpheus Sinfonia for seven years.

Chris’ compositions have been performed at the London Jazz Festival and broadcast live on BBC Radio 3 with his band Phaze Theory. He has released and produced solo recordings as well as other material with Phaze Theory through own his record label, the Phaze Theory Collective. He is now based in California, making regular visits to the UK.
barrettchristopher.com